With the current Corona virus and forthcoming financial crisis, there hasn’t been a lot of work coming my way. Since I’m not the kind to sit still all week long, I started thinking about what I could do to both be at work without any jobs coming in and boost my company’s portfolio.

Since I’ve always liked the idea of working on some projects in the studio in which I’d make things float or play with the elements in a way that they look somewhat unnatural, I decided that I would visit a few local companies who were also struggling with the measures around the pandemic and see if we could work together; a fair trade of some of their product for some of my creative outlet.

The result: publicity for both their company and mine! 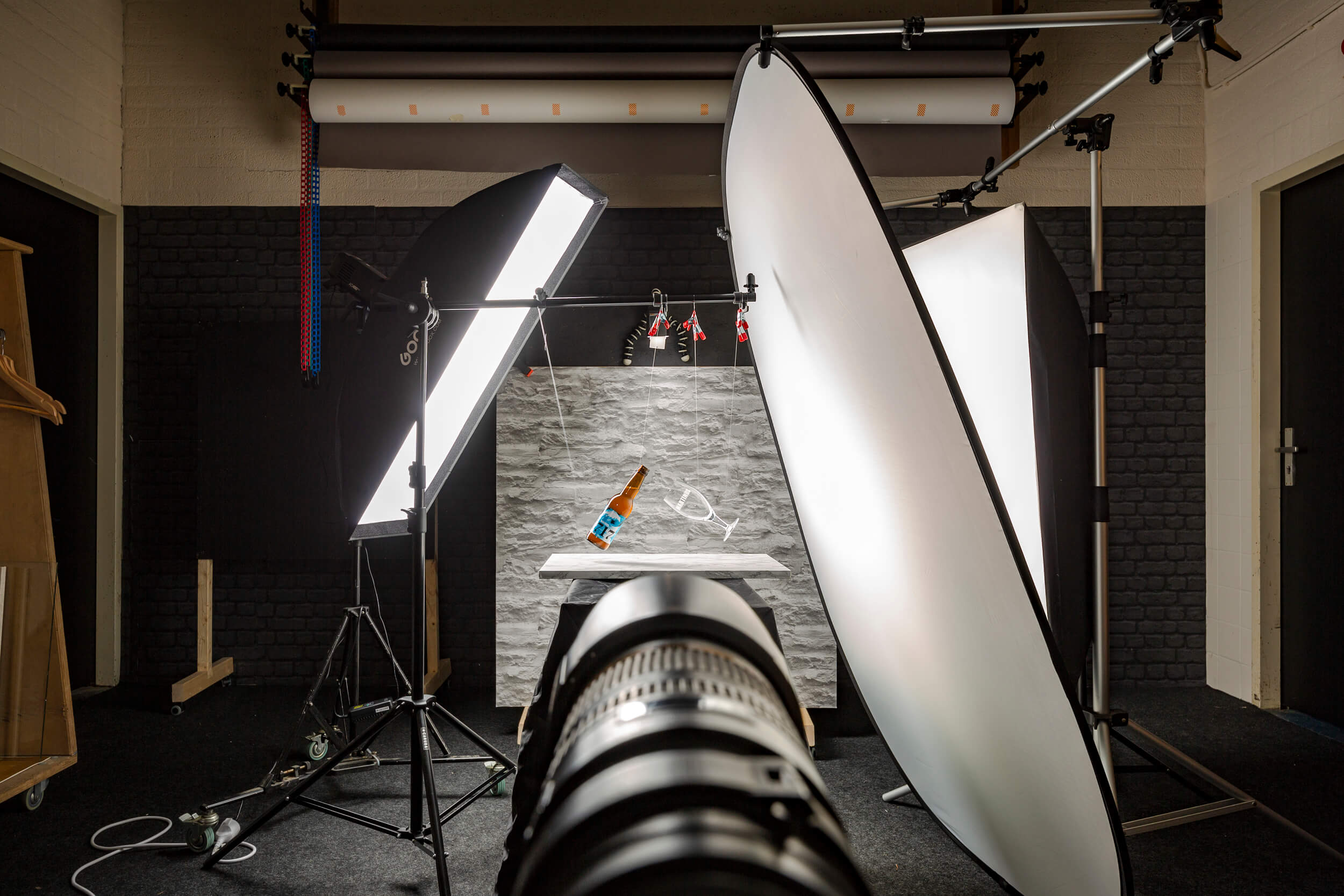 One of the companies that chose to visit was Brouwerij Martinus, a craft beer brewery and pub from Groningen. I’ve known owner Martijn for a couple of years and asked him if he would be willing to work together on this little project, which he was!

I decided to combine the colourful artwork with the characteristics of the beers themselves into my own concept for the images.

I took home six beers: Blond, Peerd IPA, Bommen Berend, Smoked Porter, 1717 and Tripel. What I’ve always liked about Martinus is their labels, they are colourful and very original. Little pieces of art of their own. I decided that I wanted to combine the colourful artwork and the characteristics of the beers themselves into the concepts for the images. I also decided to work with a diptych construction: for instance, the Blond and Bommen Berend are both blonde beers but on the other hand, Smoked Porter is very dark and 1717 is a wheat beer.

The two most traditional beer product photos I took were with Peerd IPA and Tripel. I originally intended to shoot one of them with hop flowers and the other with wheat but, since the hop I ordered unfortunately came vacuum pressed instead of in whole flowers, I decided to work with wheat for both images. What changed though, is the surrounding set, as you can see in the images above and below: 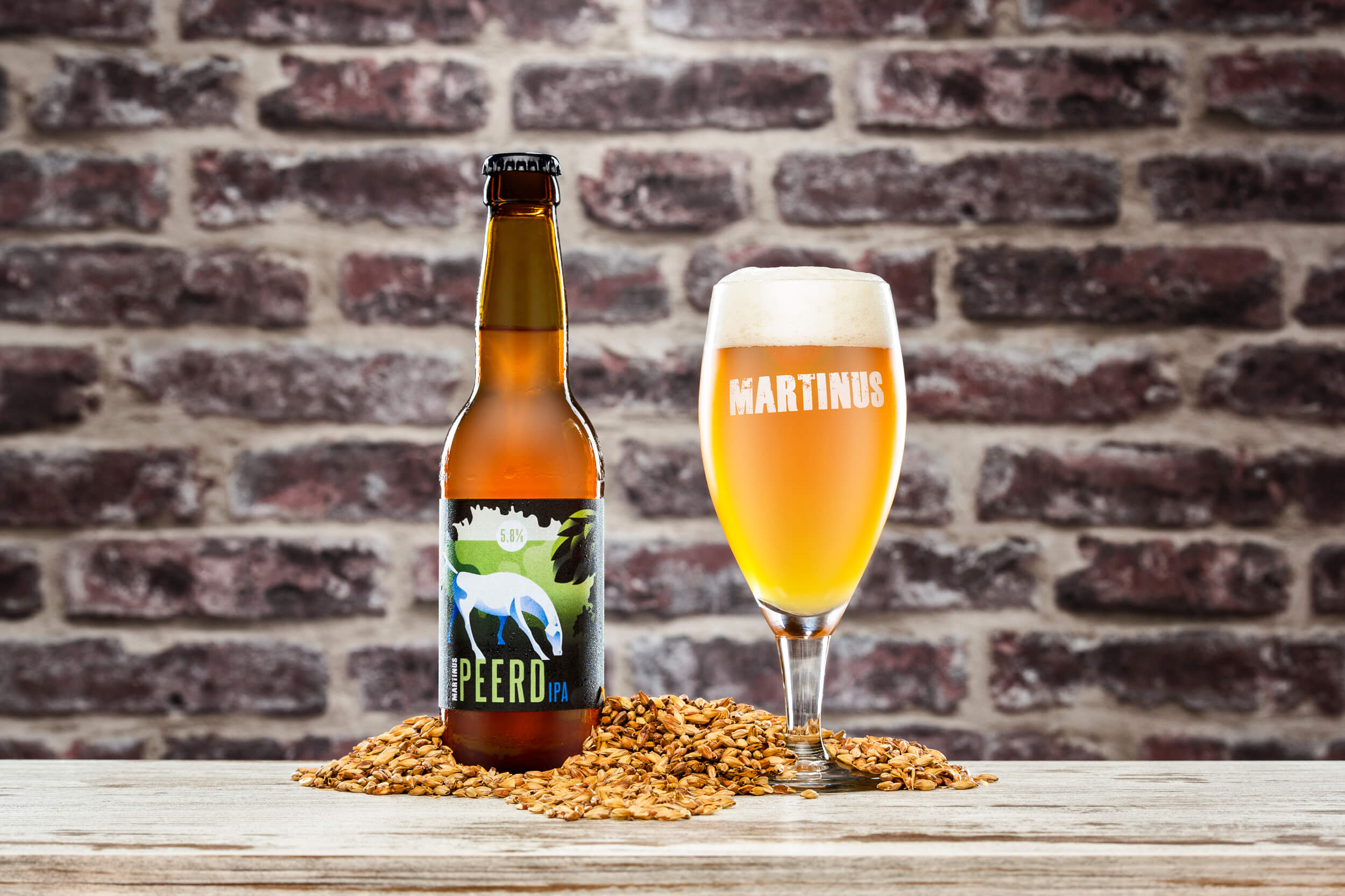 Then came Blond and Bommen Berend, both blonde beers with a fresh taste. I decided to do something original with them and try to make an obvious diptych, using a water tank as my main subject. As this is something that I hadn’t done before, I faced quite a challenge to get it done right, along with the inevitable trial and error. The tank needed something on the bottom to prevent the bottles from breaking, I needed to buy the right filter as I soon found out that the water got very dirty very quickly, the lighting worked entirely different because of the water.

As this is something I hadn’t done before, I faced quite a challenge to get it done right.

Working in a water tank was an entirely new process for me which proved to be a little stressful at times but, most of all, was such an adventure! It took me a few days to get it right in the end but I’m pleased about the eventual results: 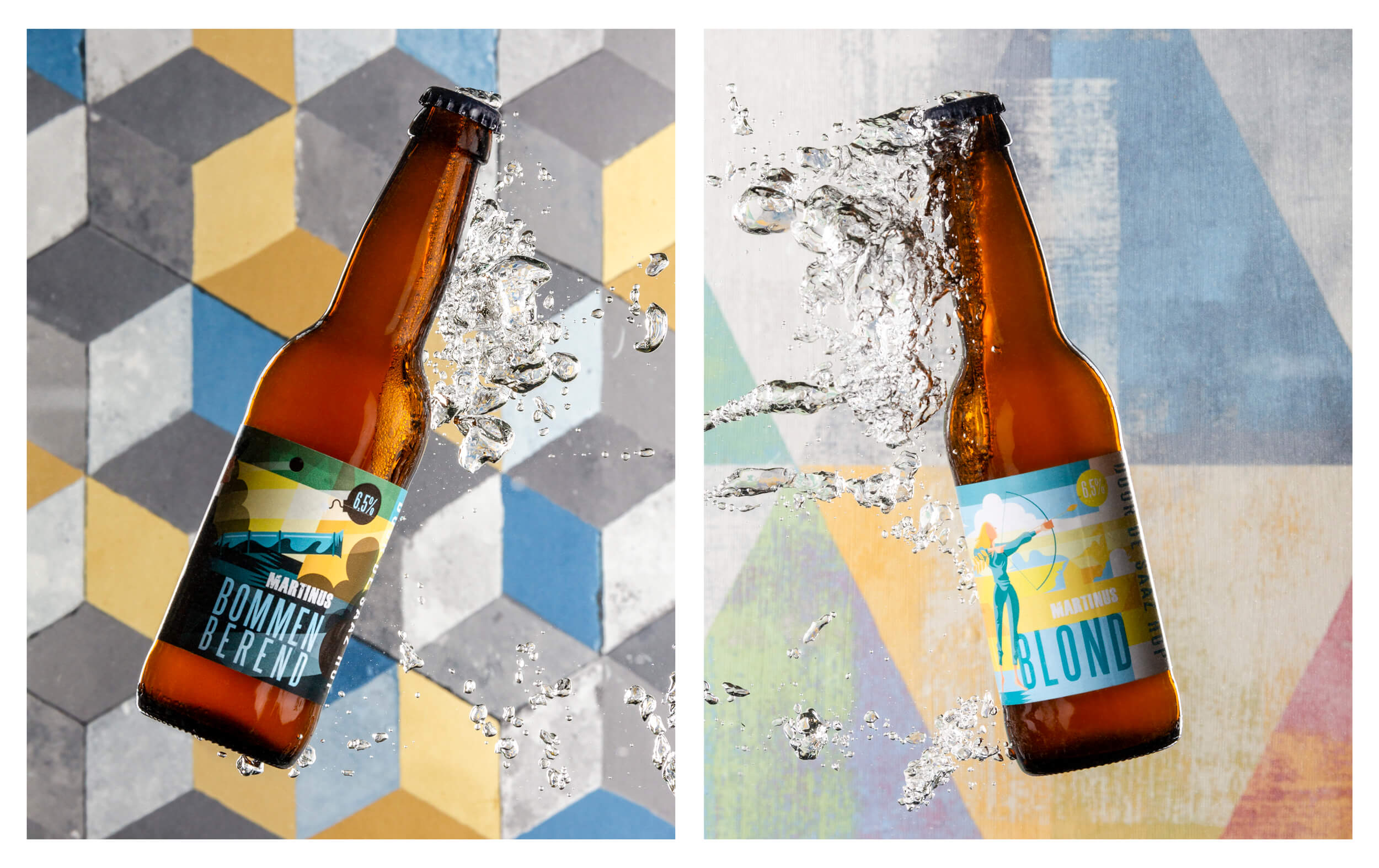 Last but definitely not least, came 1717 and Smoked Porter, my personal favourites from Martinus and probably their most opposing beers, both inside and out. One is a wheat beer, light in colour, fresh in taste. The other is a dark beer which has both the looks and taste of mystery to it. I decided to work with a levitated scene for both beers, since I figured that a special craft beer deserves a special image.

I’ll admit that I’ve spilled a good amount of beer to get the levitating effect just right; it’s hard to just estimate where the beer will go when you’re trying to both lift the fishing wire that holds the bottle’s bottom and trigger the camera at the same time but I’m very pleased with the results that it gave me in the end! 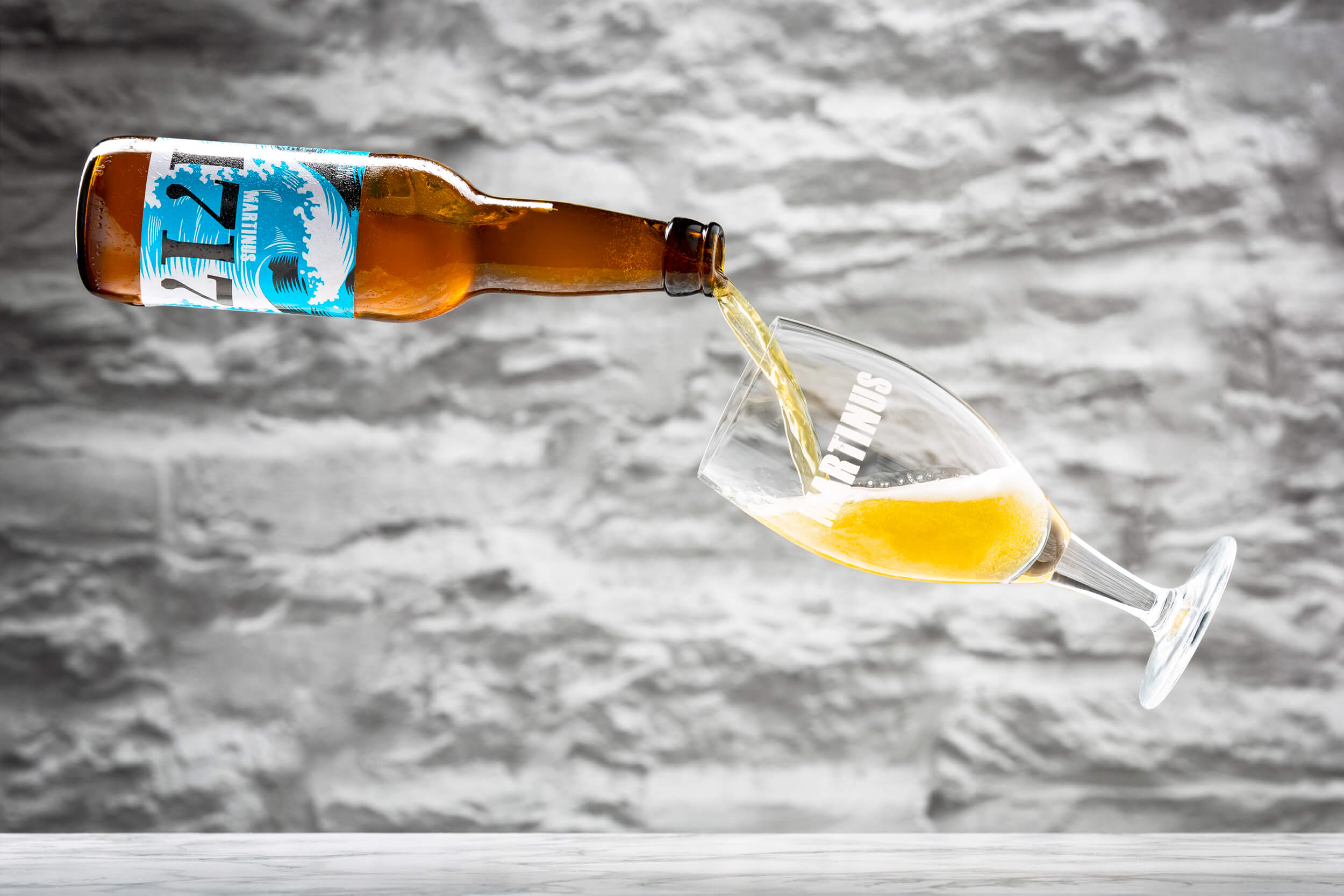 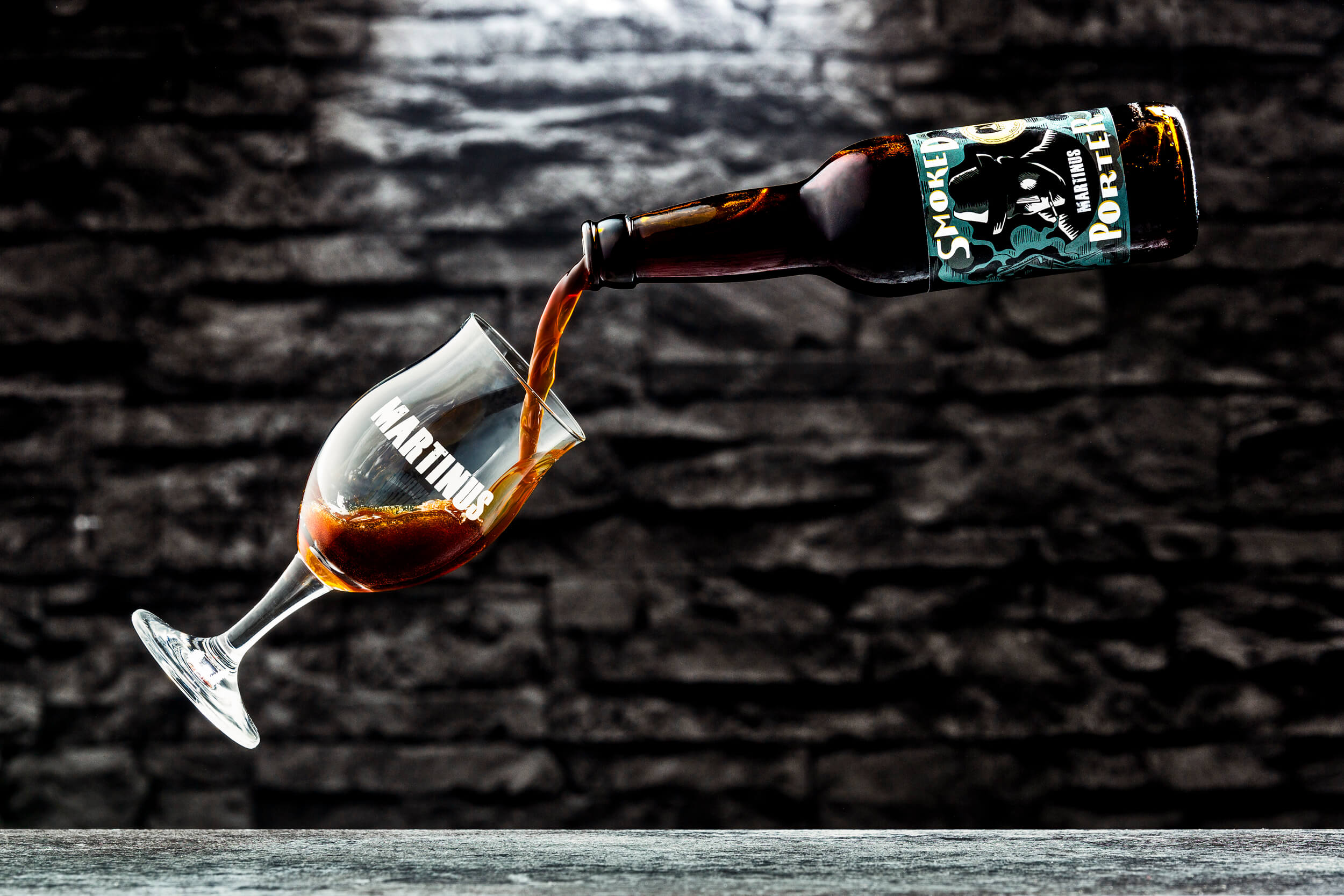 Brouwerij Martinus is slowly opening their brewery and pub for the public again. Be sure to make your reservation! Click here to visit their website. 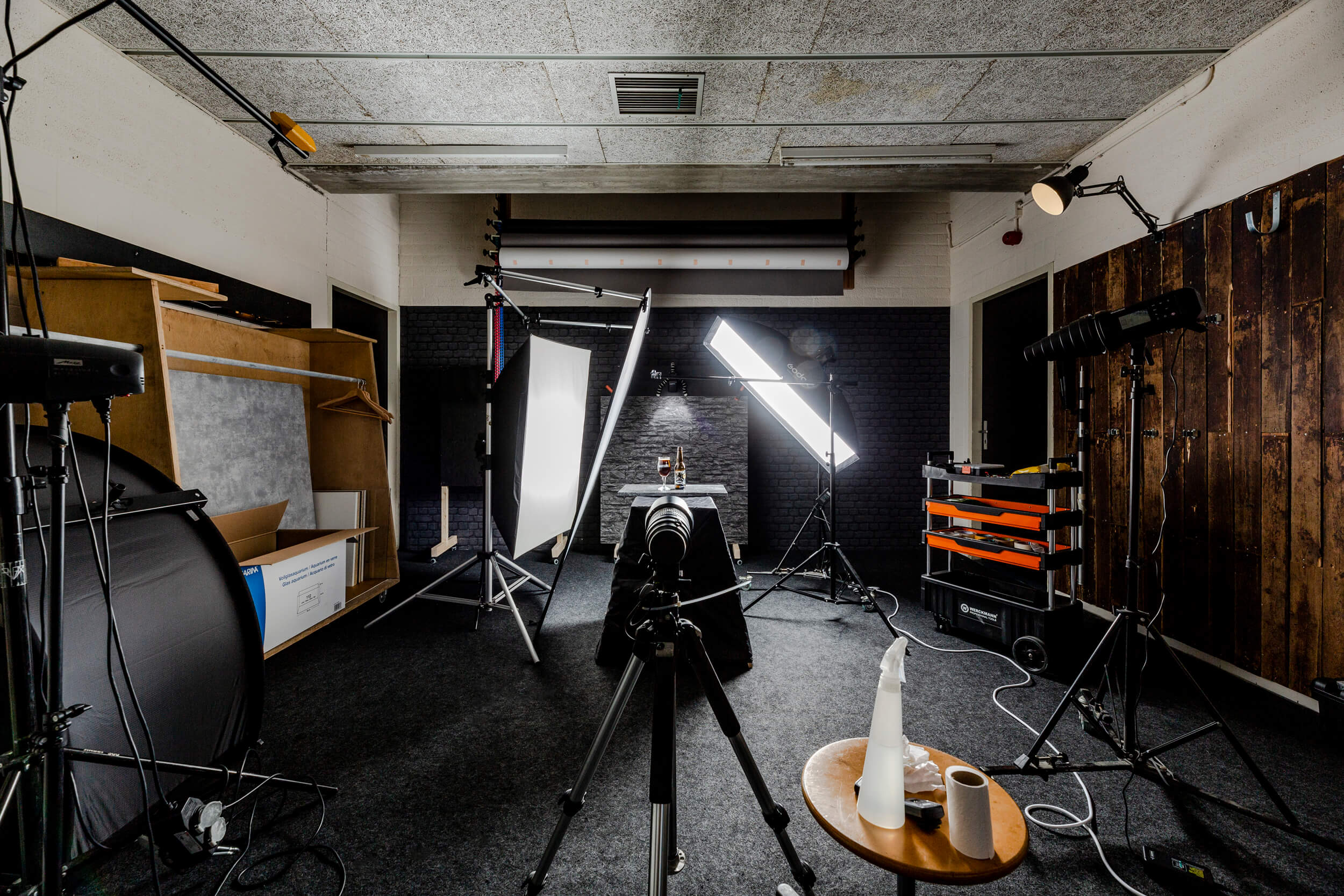